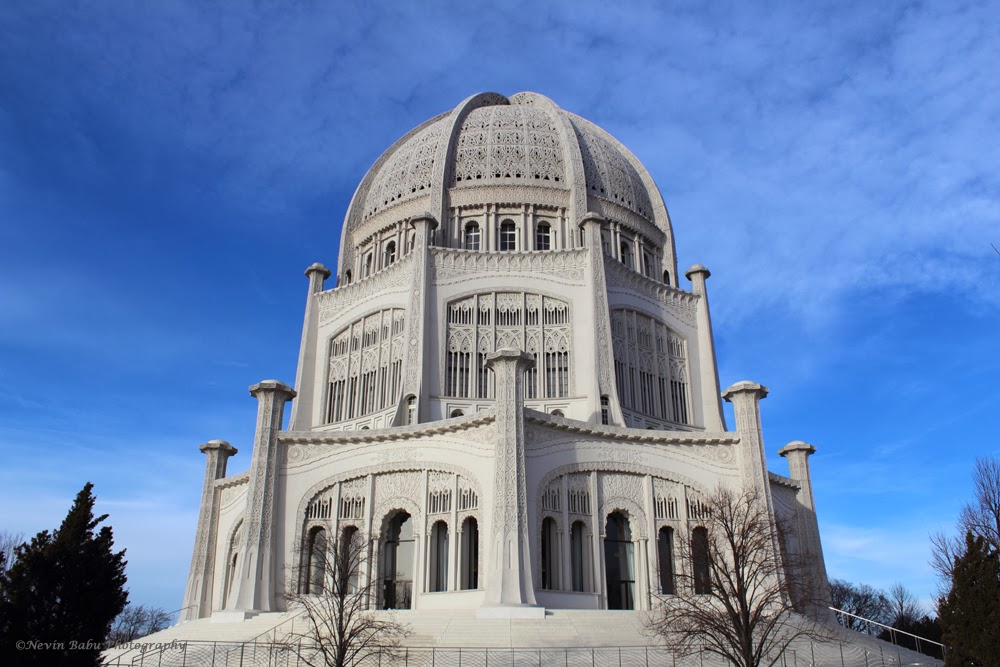 The Bahá'í Temple in Wilmette, Illinois, is the oldest surviving Bahá'í House of Worship in the world, and the only one in the United States. In 1903, a small group of Bahá'ís in downtown Chicago first discussed the idea of a Bahá'í House of Worship in the Chicago area. A Bahá'í from Chicago named Corinne Knight True went on pilgrimage to Palestine in 1907 to visit `Abdu'l-Bahá, then leader of the religion, and tell him of the growing interest in a local house of worship. `Abdu'l-Bahá gave his blessing to the project, but recommended that the structure be built away from the Chicago business district, in a more quiet area near Lake Michigan. The temple was eventually built on Wilmette, Illinois. The Bahá'í administrative body began purchasing land for the temple in 1908. The actual construction of the building did not begin until the 1920s. The temple was finally dedicated on May 2, 1953.

The Bahá'í Faith is a monotheistic religion emphasizing the spiritual unity of all humankind. The Bahá'í Faith was founded by Bahá'u'lláh in 19th-century Persia. Bahá'u'lláh was exiled for his teachings, from Persia to the Ottoman Empire, and died while officially being a prisoner. After Bahá'u'lláh's death, under the leadership of his son, `Abdu'l-Bahá, the religion spread from its Persian and Ottoman roots, and gained a footing in Europe and America, and was consolidated in Iran, where it suffers intense persecution.

There are seven Bahá'í Houses of Worship around the world, with an eighth now under construction near Santiago, Chile. The building has become a popular destination for tourists, and the Illinois Office of Tourism has named it one of the "Seven Wonders of Illinois".

[Linking to ABC Wednesday for letter 'B', Wordless Wednesday, Our World Tuesday.]
Posted by Nevin at Tuesday, January 21, 2014